We are OPEN but our store-front is closed 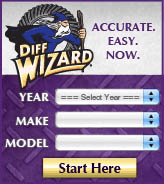 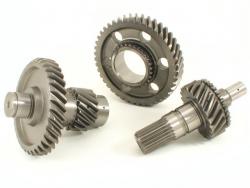 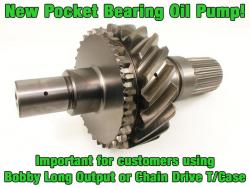 As the inventor of the 4.70:1 Gear Ratio for use in Toyota transfer case products with 25-years experience with custom low range gear set manufacturing, our 4.70:1 XD gear set is packed with far more features than any other and is in a league all by itself. Take your truck to an unmatched new level of off-road confidence, performance, and reliability today!

Your truck will become easier to control, have a much greater ability to maintain traction, and will save critical components such as your clutch (if manual transmission) and your brakes (if automatic transmission). Additionally, your torque output will increase by more than double, which means you won't have to rev your engine to get power. You'll be able to go slower, control your vehicle, prevent bouncing and jerking, which will result in a safer trail ride with less risk of breaking parts.

Each Gear Kit includes the following:

Upgrading your stock transfer case is not a difficult task and can be done with ordinary hand tools. Please see our Online Installation Instructions for more info.

WARNING: Products we sell can expose you to chemicals which are known to the State of California to cause cancer and birth defects or other reproductive harm. For more information go to www.p65warnings.ca.gov.

Marlin Crawler, the inventor of the 4.70:1 ratio in 1995, unveils their new Xtreme Duty 4.70:1 Low Range Gear Set, further establishing their stronghold on the Toyota transfer case market as the world-leader in strength, reliability, performance, and design.

Twelve years since it's creation, the most successful and longest lasting Toyota low range gear set of all time has been reinvented. Please take a moment to explore the technology of the most feature-rich gear set in the world... 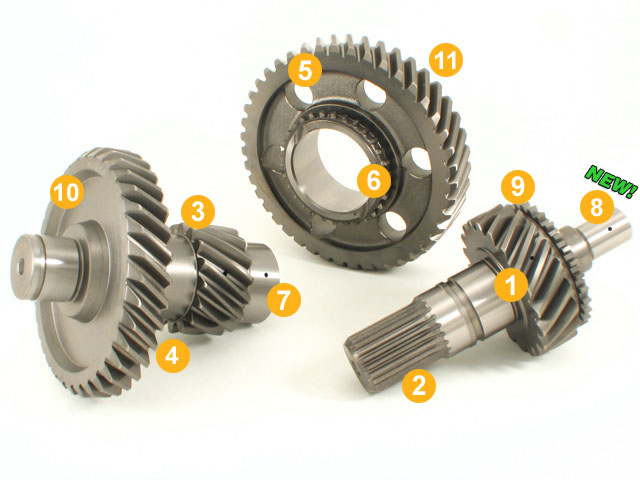 Our previous gear set was cut from 8620 steel alloy, and our new Xtreme Duty gears settle for nothing less. We only use material that is recognized by the American Iron and Steel Institute (AISI) and the Society of Automotive Engineers (ASE). Marlin Crawler means Quality. 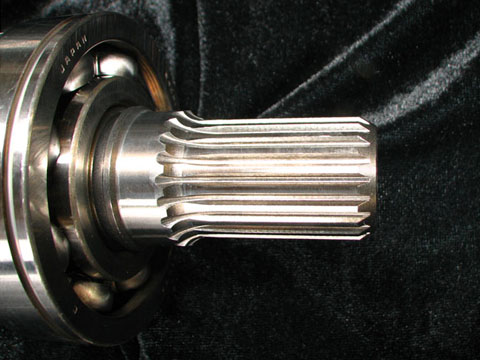 Marlin Crawler invented the Total-Spline design in July of 1995 and began producing them in 1999. Since then, the number of broken inputs and stripped out couplers have been drastically reduced. This same technology is featured in our new Xtreme Duty 4.70:1 Gears. 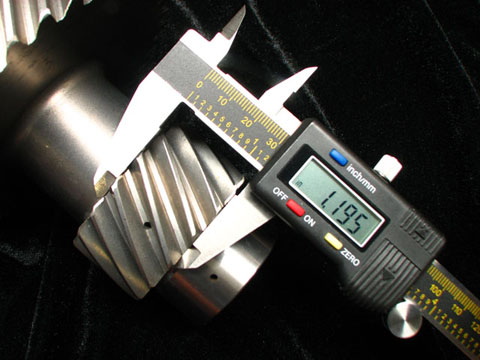 The weakest spot of the countershaft just became a whole lot stronger. The new Xtreme Duty Gear Set features extra wide teeth to spread the torque load where it matters the most. 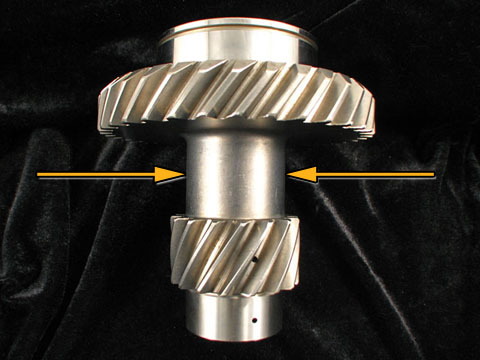 Just to make sure these Xtreme Duty gears can live up to their Marlin Crawler name, we increased the diameter of the countershaft shank. Marlin Crawler Gears are truly remarkable.

Our new Xtreme Duty gears are the first gears in the world to feature a specifically designed low speed oil transfer system. Think Crawling. Crawling slowly limits the amount of oil available to the mainshaft cage bearing. As the new Xtreme Duty low speed gear slowly rotates, oil is caught and lifted up where it is deposited right into our cage bearing oil pump system (described below). 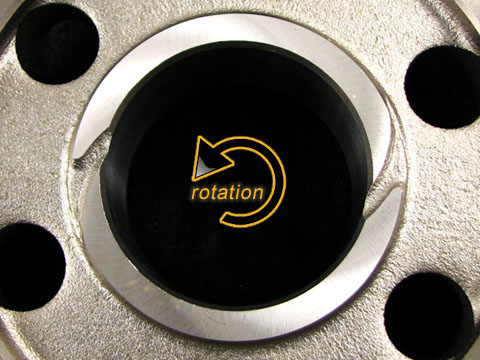 This exclusive Marlin Crawler Oil Pump system is a revolutionary way of ensuring the mainshaft cage bearing keeps a maximum amount of gear oil under all driving conditions. Wether freeway driving or 1,372:1 Rock Crawling, it is important to keep all bearings lubricated. 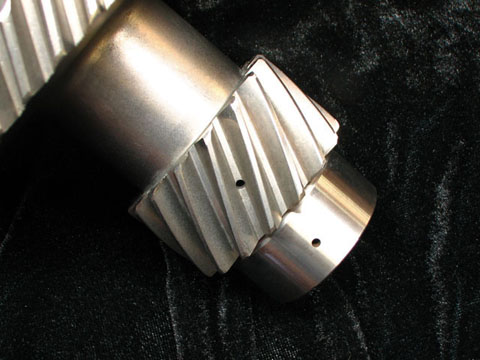 This all-new integrated countershaft cage bearing oil pump is truly amazing. When the countershaft gear meshes with the low speed gear, tremendous pressure is created between each tooth, and the surrounding gear oil is squished out of each bottom landing. What we have done is created two tunnels (180° apart) for this gear oil to be transferred straight to the cage bearing where it is needed. 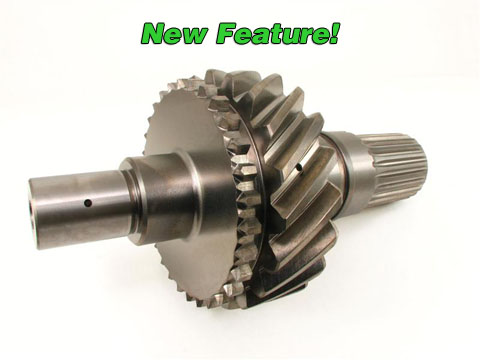 This is our new integrated input pocket bearing oil pump! Similar to the oil pump of our countershaft, as the input meshes with the countershaft, tremendous pressure is created between each tooth, and the surrounding gear oil is squished out of each bottom landing. What we have done is created two tunnels (180° apart) for this gear oil to be transferred straight to the pocket bearing of the input where it is needed.

This is specifically important for customers running Bobby Long (Longfield) output shafts that lack the important factory oil pump, as well as those who have a Chain Drive t/case positioned behind the 4.70:1 gear set. This means all 1988 and newer 6cyl and 1995 and newer 4cyl customers. 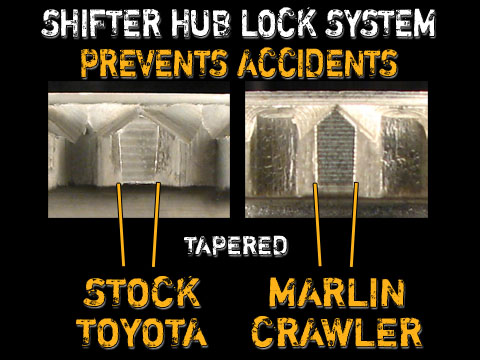 Toyota wasn't playing around when they built a tapered shift hub lock on each and every low range gear set ever made: It prevents accidents and can even save lives. Imagine Crawling up a very steep incline. You get higher, and higher up, 30-, 40-, 50-feet and higher. Now imagine your transfer case suddenly pops into neutral! Don't let this happen to you! Other gear manufactures overlook this absolutely critical shifter locking feature and Marlin Crawler refuses to sell dangerous gear sets!

The countershaft is supported by two bearings, and we did not forget about the 63/32N ball bearing. The new Xtreme Duty Gear Set features a dished countershaft near the 63/32N bearing yielding a whopping 50-times more open space beneath the bearing. This allows for massive oil circulation around the bearing, which is important when the gears are used behind a restrictive dual case adapter in an Ultimate setup or when the oil is shifted away from the bearing on steep inclines or declines.

You read that right, the new XD gear set is lighter than the stock low range gear set! Amazingly isn't it? At just 15.1 pounds, we've added technology and removed fat. Less rotational mass improves acceleration while reducing the load on the bearings. The result is a more responsive gear set with longer lasting bearings.

After examining the most feature rich and technologically advanced Toyota RF1A low range gear set in the world, we are certain you will agree that the new Marlin Crawler Xtreme Duty 4.70:1 Gear Set is on a completely different level far, far above all the rest. There simply is no comparing a Marlin Crawler with any other.